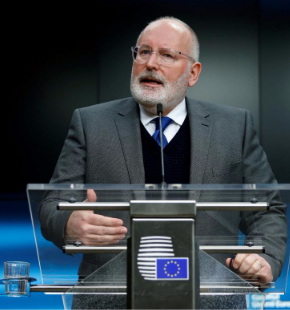 Frans Timmermans was elected six times as a Member of the Dutch Parliament for the Partij van de Arbeid (Dutch Labour Party), serving from 1998 to 2007 and from 2010 to 2012. He served as Minister for Foreign Affairs of the Netherlands from 2012 to 2014 and Minister of European Affairs from 2007 to 2010.

In November 2014 Frans became the First Vice-President of the European Commission. As the most senior Social Democrat in the Institution, he is in charge of Better Regulation, Inter-Institutional Relations, the Rule of Law, the Charter of Fundamental Rights and Sustainability. Frans works closely with his seven fellow PES Commissioners and with the Socialist and Democrat MEPs in the European Parliament and the PES Prime Ministers in the European Council.

In his four years in the European Commission, Frans has led the EU’s work on sustainability and been responsible for the adoption of an ambitious Circular Economy Strategy and the world's first comprehensive Plastics Strategy. He was also involved in the EU's negotiation, adoption and implementation of the UN 2030 Sustainable Development Goals. Legislation proposed by Frans to tackle plastic pollution and to eliminate or drastically reduce single use plastics has recently been voted on by the European Parliament. He has also led an international response to the plastic pollution challenge, presenting the Commission's proposals to other countries in the United Nations in New York, and encouraging them to match Europe's ambitions.

Frans believes strongly in gender equality and social justice. He tabled legislation to improve family leave for fathers, mothers and carers across all EU Member States, to support gender equality in the workplace and in family life. He has advocated strongly to eliminate the gender pay gap, to increase the number of women in professional and political leadership positions, and has been a staunch defender of the Istanbul Convention to eliminate violence against women. He is an active anti- discrimination champion, fighting against extremism and racism in all its forms, and in particular coordinating the Commission’s work to tackle anti-Muslim hatred and anti-Semitism.

Frans is a passionate and robust defender of Europe’s fundamental values, and he is particularly active in the defence of the rule of law in the face of creeping authoritarian tendencies by certain national governments. He has most notably defended the independence of the judiciary in Poland against excessive government influence, recently securing interim measures from the European Court of Justice to block a purge of Supreme Court judges.

Frans has also overseen the Commission’s efforts to bring about democratic change to the EU, through increased citizen participation and greater transparency in EU policy-making, opening up every step in the process to ensure the public are involved and all policies are evidence-based.

Before entering politics, Frans worked first at the Dutch Ministry of Foreign Affairs, where we was appointed Deputy Sectary of the Dutch Embassy in Moscow in 1990, before returning to the Ministry in 1993. He then went on to work as Senior Advisor and Private Secretary to Max van der Stoel, the High Commissioner for National Minorities of the Organisation for Security and Co-operation in Europe (OSCE).

Frans is married, and has four children (and two dogs!). He was born in 1961, and comes from Heerlen, in the region of Limburg in The Netherlands. His grandfathers were both coal miners. He is known as a real music lover and sport fan, who likes to visit music festivals, and can often be found in the crowd of Bruce Springsteen concerts. He is a “cavalieri” of AS Roma football club and served on the board of his hometown club Roda JC, who he watches at their Parkstad home whenever possible.